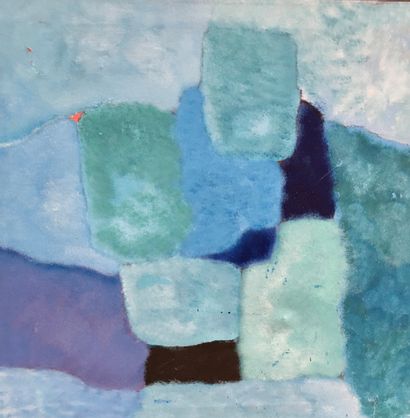 MICHELLE SENLIS - from Piaf and Ferrat to pictorial abstraction

Michelle Senlis was one of those rare women authors who succeeded in imposing their talent on post-war male society. A brilliant lyricist and sensitive poet, the author of "Mon Vieux", made famous by Daniel Guichard, was a protean, unclassifiable artist. Her lyrics, performed by Edith Piaf, Jean Ferrat, Léo Ferré, Dalida, Juliette Gréco, Isabelle Aubret and Jacqueline Dulac, among others, have lulled entire generations and are now classics. But beyond her pen was an equally talented brush. Discreet, Michelle Senlis was no less an accomplished painter and recognized by the critics, exhibiting throughout the world an abstract work with great chromatic and pictorial qualities.

"The "new Brassens" as Patachou called her, was born in 1933 near Paris. After studying mathematics, Michelle Senlis thought of becoming a painter. Her meeting with Claude Delécluse, a member of the same German-Pratin literary circle, decided otherwise, for a time. Both women, admirers of Marguerite Yourcenar, Francis Carco, Pierre Mac Orlan, were passionate about the Music-Hall and dreamt of submitting their texts to the greatest. In 1953, the tandem joined the SACEM: the most famous female four-handed writing was born. It was in 1954 that Edith Piaf was the first to recognise the duo's talent. Dazzled by "C'est à Hambourg", which was only their second joint text, "La Môme" hurried to meet the two women. Sensitive to their poetic vision of writing, she immediately included the song in her repertoire, where it would remain until her death. The success was considerable and the duo was definitely launched. The greatest artists of the years 1955 to 1980 such as Jean Ferrat, Léo Ferré, Dalida, Juliette Gréco, Jacqueline Dulac, Isabelle Aubret or even Jacques Hustin in Belgium would come and go. Recognized by their peers, Michelle Senlis and Claude Delécluse received the SACEM medal in 1960, the Grand Prix de la Chanson in 1963, and the Eurovision selection medal in 1981. Gradually, around 1975, Michelle Senlis moved away from singing to devote herself fully to painting, an art she had always cherished and practiced. Encouraged and supported by the critics, she exhibited an abstract work with great chromatic and pictorial qualities.

If many remember with emotion her vibrant texts, sung by the greatest performers of her time, fewer know her graphic and pictorial production. Encouraged by critics, notably Léon-Louis Sosset in Belgium, and supported by Pierre Courthion, who organized the first major exhibition of Nicolas de Staël's work in South America, the author of "C'est beau la vie" and "Les Amants d'un jour" exhibited regularly in Switzerland and Belgium with Jacques Hustin, but also in the United States and Japan. If Michelle Senlis has never stopped painting since her younger years, with an always renewed vigour, it is from 1975 that she really dedicates herself to painting, abandoning progressively the song writing. This is hardly surprising for a songwriter who has tirelessly enamelled her lyrics with a thousand sensitive touches, a thousand intimate colours, a whole palette of moments and deep feelings, to the point of giving her songs the air of impressionist canvases, as with Ferrat's Chanson pour toi , written in 1966, and L' Homme à l'oreille coupée , written in 1962.

Michelle Senlis's pictorial production is like her pen: poetic and atmospheric, a sensitive incarnation of emotions and impressions here thrown not on paper but on canvas. The choice of abstract figuration remarkably echoes her sung work, an underlying, harmonious rhythm unfolds in her paintings with refined colours. Solidly constructed chromatic architectures are set off and respond to each other in choreographies full of momentum. Everywhere one finds the sense of the musical and the poetic, the fragility proper to the artist remains perceptible, the brush substituted for the pen keeps its intimate and luminous nimbus. The numerous graphic and pictorial techniques used by Michelle Senlis testify to an insatiable desire to create. The rough grain of the sand paper used in certain compositions combines with the rich tones of her painting, catching the light, capturing the ephemeral. The chalk mixed with dry pigments crystallizes the sensuality of the material in all its forms. Multiplying the experiments, the artist tries engraving, lithography and monotypes with talent.

Michelle Senlis' pictorial work is the result of a long creative process, a graphic abstraction of her poetic emotions punctuated with musical resonances, like eternal reminiscences of her greatest texts.

The collection of the lots in La Courneuve will take place on Thursday, July 29 , upon presentation of a paid slip to Mr. Cheurfa - 65 avenue Jean Mermoz - euroviatransport@gmail.com

With your consent, we would like to use cookies placed by us on this site. Some of these cookies are strictly necessary for the smooth running of the site. Others are used to:

Your consent to the installation of non-strictly necessary cookies is free and can be withdrawn or given at any time.

By allowing these cookies, you agree to the deposit, reading and use of tracking technologies necessary for their proper functioning.
Read more about our privacy policy.